Traction: How We Got 1600+ Beta Subscribers for Our Software with One Simple Video Campaign

There’s a word in that headline that’s the secret sauce to a key lesson I have learned over the past few years.

Not lazy. Not done in a rush. Not thrown together.

You see when you keep things simple to start, you can move quickly on new ideas, test new strategies, easily see what’s converting and add in the more complex items when you know what’s actually working.

I can’t tell you the amount of times I’ve jumped in to build some complicated funnel or project, only to discover that I had no idea what was working and what wasn’t after a month of creation.

Think MVP in everything.

So let’s talk about why you’re here… the Simple Video Funnel we made to get 1600+ Beta Subscribers.

The basic outline of this campaign:

Well, to be honest this video actually started as a “Release Video” for an Event we spoke at called 10 Pillars of Wealth. (sneak peek at us on stage)

We wanted something that gave a suspenseful opening but also talked about all our major selling points.

Wyatt and I sat down and mapped out the script in about an hour, reviewing our Unique Selling Propositions. We made a clear cut script that hits the biggest pain points and benefits quickly.

The goal was to aim for live action of us AND have the software actually make an appearance (part of our USP is our User Interface!).

However, we knew that the only way to keep interest was to make something that was enticing, sucked you in, and left you thinking “DAM! That was cool!”

Be sure to only explore what looks sexy and solves a pain point with your product. You have limited time to showcase it, so choose wisely.

Quality was important here and although we have basic camera equipment we knew we needed some video help. We brought in our Videographer who worked hourly for us (TIP: Reach out to contractors on their websites found on the lower first and second page of Google for local videographers for weddings/events) and set up a basic white background.

(hey that’s me! You wouldn’t even know we shot this in a home office 😀 )

The shoot took about 20–25 minutes and was over in a flash. To make it easier, we took our script and segmenting out sections that were all one succinct thought.

We took the sections and divided them evenly between us. We shot each section as one cut and then paused, read the next line, and shot again.

Each of us shooting our sections one at a time. Nice and easy 🙂

Afterwards, we recorded the screenshare based on our script using screenflow and outlined which pieces connected to the various parts in a basic storyboard.

But, the final piece de resistance was the Music. This took a little while, but Wyatt eventually found a track that had the perfect vibe we wanted. 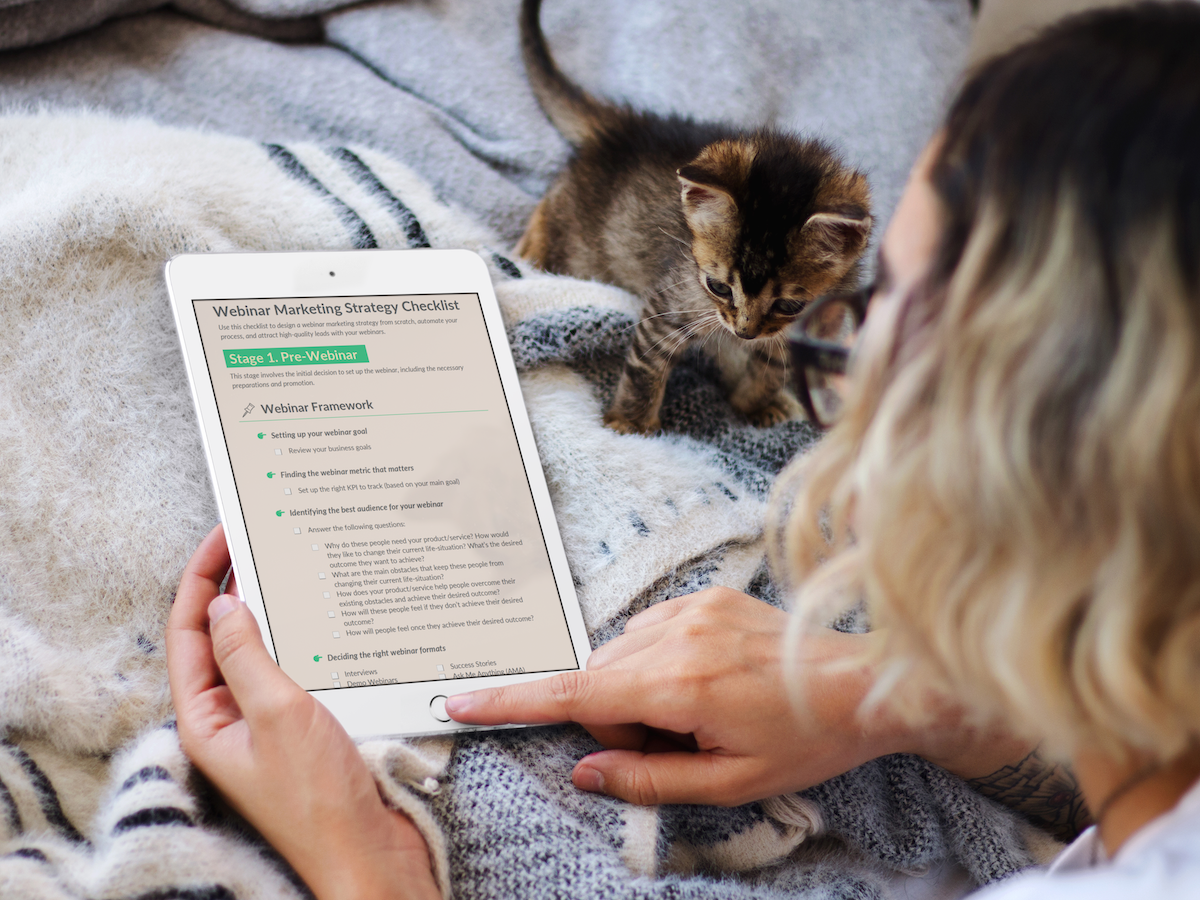 to design your very own high-converting webinar marketing strategy from scratch, then automate the process to attract high-quality leads.

We promise to never spam or send emails about cats.
Okay, maybe some cat stuff.

Our targeting took a few tries to dial in, but we started simple with FLEX Targeting (or combined audiences of people who liked one interest AND also another interest)

To start we went with SaaS and Software companies our target customer would use and an Influencer in their space. So a tool and a teacher.

It can take a few variations and testing, but once you find a few segments that work together well, you’re in business.

Here’s an example of a “Tool and a Teacher:”

Typically I try to aim for a more specific campaign than a general campaign, even if the audience is smaller. So <200k as a campaign audience. Once you get over that you are talking to a lot of people who may or may not really care.

You start paying for views that don’t help you at all.

We then try to scale them out to 3–5 of these campaigns types with different working segments.

In this case, we had 3 separate campaigns bringing in all the views and traffic.

After experimenting with a few targeting sets and letting them build, we watched as it optimized down to $0.01 PER VIDEO VIEW.

We also heavily monitored the comments coming onto our ad and used it to push people to a demo (when we opened demos) as well as interest in the product.

In the end, we got amazing feedback:

Honestly, this may be the one part of the entire campaign we spent the least time on.

Our website demio.com was created and designed with only 1 call to action in mind to start… Sign up for beta!

Instead of having to design new landing pages and testing copy, we just sent the traffic to what we knew would work with what we had previously built.

Our website header showcased the product with a few marketing headlines similar to our Video. It’s important to keep branding the same across all of your marketing, specifically with ads to web pages, so we focused on a clear connection between ads, copy, websites, and videos.

The first section under the header is a big blue button to secure a spot for Beta with only first name and Email required.

So far, we’d enticed people with a video, interested them and asked them to commit to secure a spot for beta.

Now our Beta is a paid beta… and what we needed to do next was use this time to get customer feedback and get people on a live demo.

When we first set off with this ad we were ahead of schedule with marketing and knew that we couldn’t initially do demos.

Instead, the Thank You page (page after opt-in) redirected them to our “Behind the Scenes” journey v-log site that you’re reading on now. They could learn more about us and what we were doing as we were building Demio.

The Thank You Page:

When the Demio Platform reached the point where selling could commence and we felt capable to run Demo’s for one on one enrollment into Beta, we made a strategic switch.

Instead of the general site, we created a short 80 Second video that welcomed them to the beta program, offered insight on what was next, and how to get signed up for an Onboarding call with us.

We literally shot it at our home video studio and wrote a simple script in about 10–15 minutes.

Again the key here is to get people excited for signing up. Give them direct steps on what they can do NOW to get moving forward. And any requirements IF they do sign up.

We wrote, shot, edited, and uploaded video (to Youtube) all within a few hours.

I kept our branded blue button and directed people to a calendar program to start signing up for their demos.

For this campaign, we decided on Calendly as we were using our joint Google Demio Calendar account as our scheduling area.

I connected our Calendly account to the team calendar and made a Zapier connection from Calendly and our CRM (Active Campaign).

When someone confirms a date/time, Calendly sends out pre-made reminders, but we also have them in our CRM so we can mail as we need.

Our first email goes out instantly when they sign up as a confirmation of their Demo.

It then checks in 1 day if they signed up, ends the automation or moves them forward. The next day they get checked again, before finally getting a final reminder if not signed up for a demo.

We can definitely continue to improve that campaign and elongate it as well.

The Beta list is also being used in a few other strategic ways we can discuss in other blog posts.

Running some numbers behind the Campaign:

Every day we make a new section with a clear indication of our show rates, close rates, and the number of follow ups needed.

Does it work? Absolutely.

This Beta List campaign was running prior to our Demo abilities and not all the leads have gone through the full campaign, so to give recent statistics I’ll just cover the past 1.5 months.

In approximately 1.5 months (since demos opened) we’ve done ~75 Demos (a few reschedules) with ~50+ coming from the Beta List directly being built on Facebook (some of the traffic is from our own posts too, but all part of the same video campaign).

In that time, we got ~460 Sign ups to the Beta list from which we’re getting an average of 11.5% Demo Signups from the subscribers.

Our closing rate is hovering right at 20% for the demos and we have ~40% of Attended Demo’s that can be followed up with to close the sale in a few weeks.

Not too shabby for a simple funnel.

to design your very own high-converting webinar marketing strategy from scratch, then automate the process to attract high-quality leads.

We promise to never spam or send emails about cats.
Okay, maybe some cat stuff.

David Abrams
David is the Co-Founder of Demio and has years of experience in SaaS, Marketing and Business. He is dedicated to supporting Demio in being a streamlined SaaS product and company. Demio's mission is to make marketers' lives easier and happier, and David spends his time at Demio designing ways to make that happen.

We’re excited to introduce a highly anticipated product update as our team improved the Demio webinar room to support up to ...

Why is Lead Management Important? You may have an idea of what lead management is just by its name. However, it entails much ...